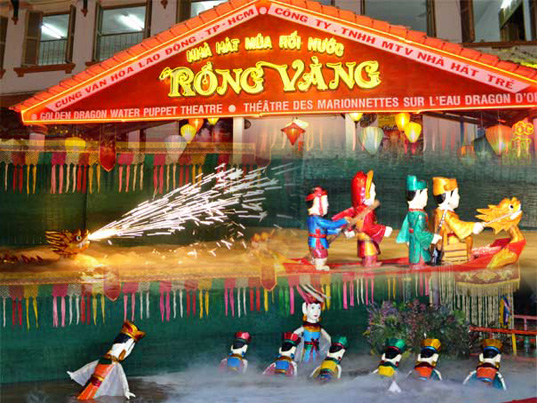 The Golden Dragon Water Puppet Theater is the perfect place to enjoy a Vietnamese cultural show in Ho Chi Minh. The theme of their performance showcases the beauty of ancient Vietnam and its mythologies. Live instrumentalists and voice actors who are dressed in traditional Vietnamese attires added more beauty and authenticity to the performance. The show’s slapstick comedy and adventurous theme make it a fun watch even if you don’t know how to speak in Vietnamese.

We were glad to learn about this puppet show from a pamphlet in our hotel. Its ticket price is reasonable and it’s the kind of show that we haven’t seen before. The theater’s colorful lanterns and large puppets at the entrance made the show look more attractive. Seeing plenty of locals lining up to watch the water puppet show made us more optimistic.

Upon entering the building, we can’t help but ask their staff to have a photo with us because of their beautiful traditional clothes. The moment we got inside the theater, I realized that it wasn’t as big as I expected. It’s actually smaller than our typical movie house here in the Philippines.  A large scale cultural show would be more expensive so it was nice to have a miniature and more affordable cultural show option.

After the theater got filled with guests, the show started right on schedule. I wish that there were subtitles floating on the stage as they sing and speak because it was purely in Vietnamese. Vietnam is actually one of those countries that we visited here in Asia where it’s rare to encounter someone who speaks in English. It’s a good thing that we don’t need to understand the language to enjoy it but it’s undeniably better if we could.

Spoiler Warning: The next part will cover a short summary of the actual performance.

The show started with two dragons facing each other which seems to be a quick backstory about their local myth. After the dragons’ face-off, things started to slow down when a man riding a water buffalo came in. What I like about the following acts is that they’re showcasing the simple and laid-back lifestyle of the old Vietnam. It also covers agricultural and fishing livelihoods that were more common back then.

There were parts where people were laughing in some of the dialogues but my wife and I can’t relate to what they’re talking about. A grander presentation came in when a royal family had a parade. The next scene was about two large and colorful chickens that were talking to each other. They could be phoenixes but it’s hard to tell. A quest to hunt a giant sea serpent followed. The use of dry ice to have a smoke effect made their discovery of the serpent look more mysterious.

After a successful battle with the serpent, the next scene is a dragon boat race. The three large boats full of puppets were fun to watch. Suddenly, everything went dark and a cloud of smoke covered water. Ghostly voices can be heard while female puppets with crowns slowly enter the stage. They seem like night elves in Vietnam’s version. They gracefully danced in the smoke as it slowly fades away while the light turns bright.

We really had a great time watching the show. A visit here is highly recommended and the price you will pay here is really worth it.